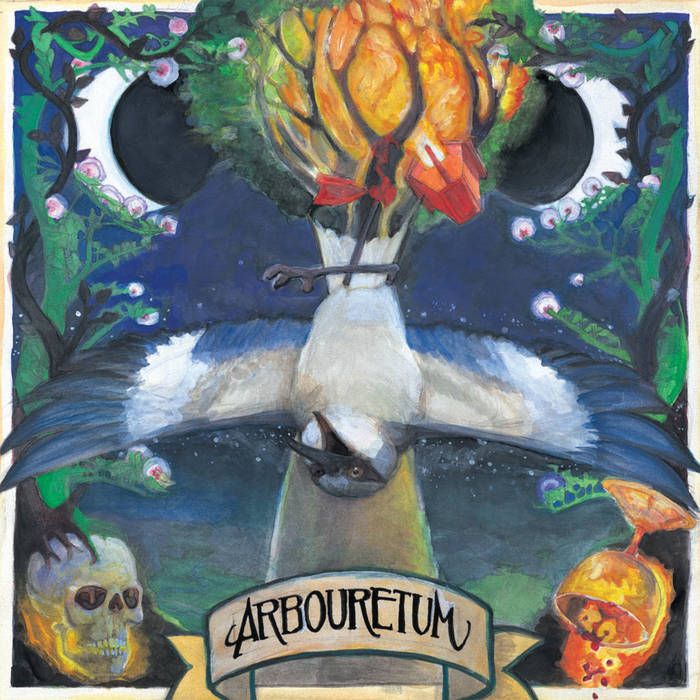 “….He was somewhere, he had come back through vast regions from nowhere; there was the certitude of an infinite sadness at the core of his consciousness, but the sadness was reassuring, because it alone was familiar. He needed no further consolation. “ - Paul Bowles, The Sheltering Sky

Rites of Uncovering, Arbouretum’s Thrill Jockey debut, is an album of broad scope, musically, lyrically and texturally. The name alludes to a process of constant questing that is part of Arbouretum’s raison d’etre, what Heumann describes as “a sense of religiosity that is not tied down to a particular moral or ecclesiastical approach, but rather proto-religious feelings such as awe in the face of something greater.” In this case, that “something greater” is the music itself and/or the source thereof. Rites…was influenced either obtusely or more directly (as in the song “Mohammed’s Hex and Bounty“, based on “Love with a Few Hairs” by Mohamed Mrabet) by the writer Paul Bowles. ? “There is an effort to ‘get to the bottom of things’, to peel back a certain protective veil between an observer perspective and what we could term naked reality,” says Heumann. “We are mostly concerned with trying to convey the emotional impact of an experience or state of mind to the listener.”

Dave Heumann lives and works in Baltimore. He has played with Anomoanon, Bonnie “prince” Billy, Cass McCombs and Papa M. Arbouretum is the first band for which he is the primary songwriter, guitarist, and singer. Heumann’s idea for the band was one whose songs would evoke natural forms and movements as opposed to architectural constructions with rigid forms and linear progressions. Whilst the band’s hard-to-find debut was largely an individual process with players working to articulate Heumann’s vision, Rites of Uncovering is the work of a group. Long-time friend Walker David Teret is a multi-instrumentalist who had played in many of the same groups as Heumann. In those groups and in Arbouretum, he has played guitar, bass, keyboards, even the drum kit at times. Walker primarily plays the guitar in the current lineup, but plays a variety of instruments on Rites of Uncovering. Also on the album is drummer Mitchell Feldstein of Lungfish, who filled in when David Bergander (of Love Life and the Celebration) had to depart for other commitments mid-way through the recording. Bassist Corey Allender also played in bands such as Stars of the Dogon, Fascist Fascist, and Cass McCombs’ band before joining Arbouretum.

Rites of Uncovering was recorded in three main sessions: at Rove studios in Shelbyville, KY by Paul Oldham in September 2004; at Magic Shop in New York City with Matt Boynton in September 2005; and with Jeff Duncan at Two East Audio in Baltimore. Some overdubs, including vocals, were done at Soma Studios in Chicago with John McEntire. With each session they tried different technical approaches to recording as well as arrangements, often reworking songs as time and new members brought with them new ideas. A good deal of time was spent working on texture and tone; an open sampling of flavors, as a cook might use spices. The band experimented with equipment such as amplifiers (including music man combo, fender blues jr, silvertone, ampeg reverborocket, voc ax 30) and instruments such as a vibraphone, electric pianos and even a heavily effected toy flute. When performing, their epic guitar solos, Heumann says, “our approach is one of collective deconstuction, whereby we take apart the melodic and the rhythmic ideas of a song, turn them sideways, backwards, or invert them in order to explore and develop the song’s possibilities.”

Arbouretum warns that live versions of the songs may bear only a passing resemblance to the recordings. “They exist so as to be forever interpreted anew...ideally, at least.”

We could hope for nothing less!